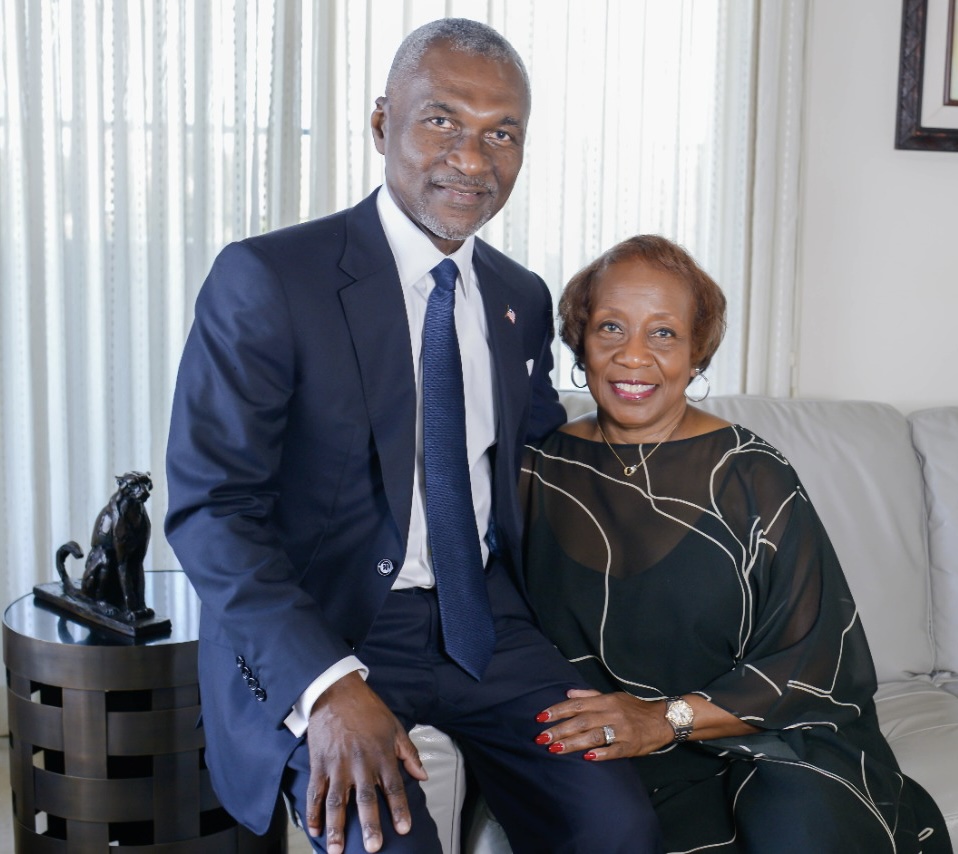 Mr. Alexander B. Cummings is a businessman, philanthropist, and politician.

He is the Political Leader and Standard Bearer of the Alternative National Congress (ANC), while also formerly Chairman, leading the legal formation of the Collaborating Political Parties (CPP), the largest opposition grouping in Liberia. He is the Founder & Chairman of Cummings Investments Holdings, Ltd., and the Founder of the Cummings Africa Foundation.

He holds a BA in Finance and Economics from Northern Illinois University and an MBA in Finance from Clark-Atlanta University. He and his wife Teresa have been married for 40+ years. They have two children, Ayo and Boikai, and five (5) grandchildren.

Mr. Cummings was born at the Old Government Hospital in Monrovia to Mr. Alexander B. Cummings Sr, an educator and Episcopal prelate, and Mrs. Ayo Cummings, a midwife, and small business owner. He grew up in Point Four, Bushrod Island, and attended Demonstration Elementary School.

Thereafter he enrolled at the College of West Africa (CWA) high school where he graduated as senior class President. He started college at Cuttington University in Bong County and later transferred to Northern Illinois University in the United States. He returned to Liberia and began his professional career at the Liberian Bank for Development & Investment. He later returned to the US to further his education, but like many Liberians could not return due to the civil unrest.

Growing up in a relatively poor neighborhood in Monrovia, Liberia, he is a success story that has proven the immeasurable value of hard work, determination, integrity, and an unwavering commitment to achievement without compromise. His nearly four decades of experience working at international businesses, highlighted by an almost two-decade career at The Coca-Cola Company, covered stints in Africa, Europe, and the United States. Upon joining the company in 1997, he served as the Managing Director/Region Manager for Nigeria, where he demonstrated his ability to drive sales and foster significant growth of Coca-Cola’s business in Nigeria. Within a short period, he was promoted in 2001 to become President and Chief Operating Officer of the company’s Africa Group, responsible for operations in Africa, encompassing a total of 56 countries and territories across the continent.

After several years of achieving record sales and profit growth, Mr. Cummings was again promoted and named Executive Vice President and Chief Administrative Officer of The Coca-Cola Company, the second-highest-ranking officer, and for nearly a decade was responsible for most of the company’s business functions across five groups and 200 countries globally with an operating budget of roughly $1 Billion and thousands of employees worldwide. Before his work at Coca-Cola, Mr. Cummings was Vice President of Finance for Pillsbury International, with financial responsibility for growing an over $1 billion international food business with operating companies in 16 countries. In this capacity, he was the youngest ever senior executive at the Pillsbury Company at the time and its most senior of African descent, rising through the ranks after joining as a low-ranking analyst. He has lived and worked in the UK, the US, Nigeria, Kenya, and South Africa. He retired in 2016 to focus on Liberia and serve his country.

Proudly Liberian and passionately committed to its development and that of Africa as a whole, he launched the Cummings Africa Foundation in 2015 with his wife Teresa and children Ayo and Boikai. In roughly five years, the Cummings Africa Foundation has invested roughly USD 1.5M into health, education, entrepreneurship, the arts, women and youth empowerment, and infrastructure projects, creating real change in Liberia. In 2015, Mr. Cummings received Liberia’s highest honor, the Humane Order of African Redemption, for his humanitarian work in Liberia and acts supporting and assisting the Liberian nation and Africa.

Mr. Cummings currently serves on the boards of S.C. Johnson & Son, Inc. and until recently, C.A.R.E. and Clark Atlanta University (CAU) where until October 2016, he was its Board Chairman. He has also served on the boards of Chevron, Coca-Cola Bottling Company Consolidated, Africa-America Institute, Africare, the Corporate Council on Africa, The African Presidential Archives & Research Center, and the Center for Global Development’s Commission on US Policy toward Low-Income Poorly Performing States (LIPPS). He was a member of the Executive Leadership Council (ELC).

In 2016, Mr. Cummings announced his first candidacy for the Presidency of Liberia and contested in the 2017 elections. In 2020 he assumed leadership of the CPP, and during his tenure heading the CPP, he led its establishment legally and oversaw its triumph in the December 2020 midterm elections where the ruling party only won 3 of the 15 Senate seats, with CPP/CPP-aligned candidates winning the rest and CPP the majority of those. In the next six months, CPP will present the consensus opposition presidential candidate for the 2023 elections, as well as advocate for elections integrity in Liberia.

Mr. Cummings brings wide and varied private sector experiences, his success in consistently delivering results by building strong teams and ensuring accountability, and his unblemished record of integrity, making him the most prepared candidate for the office of President of Liberia in the upcoming 2023 elections. Mr. Cummings is deeply committed to ending the culture of impunity in Liberia by combating corruption, restoring good governance, and establishing a War & Economic Crimes Court. His goal is the rebuilding of Liberia's capacity and international standing; as well as economically empower the people and nation of Liberia by growing a diversified economy attractive to foreign investments, pursuing public-private infrastructure development, and investing in Liberian entrepreneurship, and education (STEM/TVET) and primary healthcare.